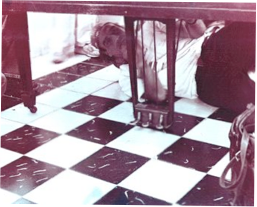 Ben learned rebuilding of old Steinway uprights in the San Francisco piano shop of  Victor Charles.  He has tuned in Carnegie Hall and Philharmonic Hall in New York, the Paris Opera, the Teatro Nacional in Havana and Casas das Rosas in Sao Paulo.

The Underwater Piano Shop began life in Berkeley, California.  Ben had it with the Bay Area so he moved to New York City for 12 happy years until his bride and wee children had it with New York and they all moved to Tokyo – but that idyllic life was cut short by the Great Tohoku Earthquake of 2011.  The Underwater Piano Shop’s final resting place is the UK (first Edinburgh and now Coventry).  Why underwater?  Because Ben’s hippie dream was to make underwater glass harmonicas for the amusement of dolphins and whales but that proved to be too much trouble and he abandoned the project but he kept the name.  A simpler explanation:  we sometimes tune below C level.

Ben has experience rebuilding and tuning for both the famous and the impoverished, not only at the US and Japan, but also in Cuba.  In 1995 he founded a cultural exchange called Send a Piana to Havana following a visit to Cuba, whose old Soviet-made pianos have been ravaged by tropical climate and termites and by years of pounding by the dedicated students in that country’s famous music schools.  The organisation, imagined as a sort of piano enema for blocked-up US policy on Cuba, sent more than 250 pianos donated by Americans to Cuban schools. He comes by his internationalism naturally.  His parents were Jessica (Decca) Mitford, the muckraking writer, and Civil Rights attorney Robert Treuhaft.   You don’t know about Bob?  Coming soon: here he is in 1953 before the California Un-American Activities Committee answering the question, “Are you represented by counsel?”  After an hour of Bob answering this one question the courtroom explodes in cheers and laughter and is cleared out by the Committee.

The late brilliant pianist and conductor Charles Darden said…
I have known Ben since the Berkeley days. I was a friend of his mother Jessica Mitford. I moved to the East Village many years before he arrived. I am a pianist/conductor and I jumped for joy when I saw Ben on the street in the village one day. He has tuned all of my pianos. He IS one of the best tuners in the world. Edinburgh will find this out especially during the Festival time. When I visited Cuba several years ago, his name was mentioned all over and they are so thankful to have had him send pianos there. Edinburgh is about to get a bolt of lightening and a great guy. Don’t be fooled Ben is one of the best piano technicians in the world. He did leave a pastrami sandwich in my grand piano after a tuning my grand piano. I guess he was in a hurry to get to the next job. So I ate the sandwich. May God bless Ben and his wonderful family. He should have no problem in Great Britain. After all, he aunt is the Duchess of Devonshire.

Jorge Lopez-Marin’s danzon Médico de Pianos, written to thank Ben for a Cuban tuning, is a hit throughout the Spanish speaking world. This version is Performed by the Cuban feminine septet Camerata Romeu, known to the composer as Las Quatorze Rodillas – the Fourteen Knees, in honor of their alluring physiology.

The Piano Tuner’s Lament, by Ben Treuhaft (below)