It’s a schlep from the wilds of Leith back to civilisation if you have no sense of direction and you take the bike paths.  Otherwise it’s not too bad, but that night I biked 16+ miles r/t, in circles.  Next time, city streets.

Claire plucked her free piano off Gumtree.  I wasn’t worried, free/cheap pianos here in Edinburgh are excellent.  Her Langer birdcage upright (1910ish) presented a challenge though, over half a tone low with brittle treble strings.  But Claire and her man are perfect hosts and I don’t mind returning to fix my four broken wires.  Plus they live above a Chinese ostrich-in-oyster-sauce joint where you can feast on fast-wokked Bigbird/veg on rice for £7 including tip.  Plus Leith is tops  after that lovely if cheesy Sunshine on Leith  re: Proclaimers. 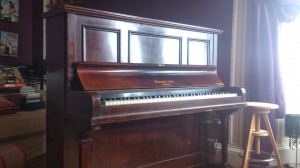 It’s lucky Claire is a photographer (and chef, among other talents).  I could never have described the beauty of her piano.  Here’s it is basking in Leith sunshine 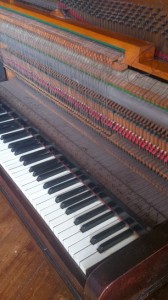 of the birdcage action with its new bridle tapes (pretty good for a free piano, those must have taken 4 hours and to install and they cost £15 to buy), 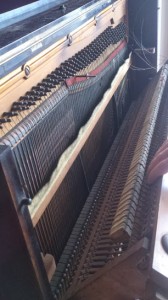 and another, of the 4 strings I broke just as I was finishing up thinking I had got away breakage-free.

Raising pitch on straight-strung pianos is tricky for American tuners.  In this case the bass had to be tuned twice because it came out flat, where on the Filmhouse Bechstein upright they had to be tuned twice because they came out sharp.  The pitch ended up solid on 438 after one pass, but they’ll have to have me back by January – after I return to fix those strings (£35 probably). 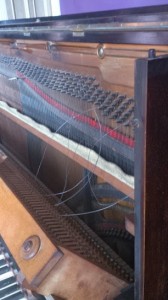 Claire is about to take her first lesson from Natasha (like me, also from Gumtree), at £12.  I’m dying for her report.  My wife and singer friend are looking for a brilliant teacher.